The artistic team spent 3 days learning about Herring Island from elders, historians and artists. We then went away and worked on our creations. As the narrator and song wrangler my role was to create the words and define the songs. I worked closely with the director, Jeminah Reidy, to establish which pieces of information were most important and which pieces of text worked in which location on the island, in relation to the ephemeral and performance art being created by the other artists. We managed a quick run through on location on the day of the performance. Lucky I enjoy flying by the seat of my pants!

I had never visited Herring Island. To get there was a drive through the back streets of Richmond to park at a freeway underpass and wait for the canoe.  The journey from one side of the river to the other, so completely manual, offered a moment to take in all that we had learned over those days of shared information and to be somehow transformed in to the present.

It was a richly rewarding, fabulous and intense few days culminating in a twilight performance for around 150 people. 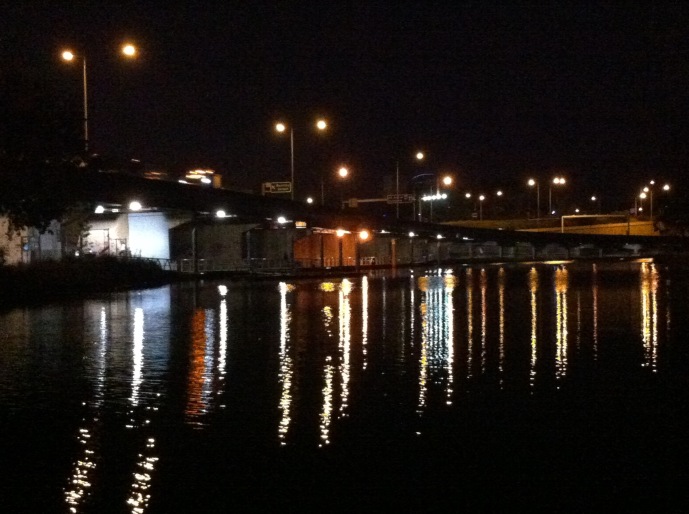 The Monash Freeway at night from Herring Island

I wrote the below as the core information we wanted to communicate. I then wrote cue lines so I didn’t miss anything and improvised the rest.

Housekeeping / OH&S – Good evening ladies and gentlemen and welcome to Scenes on the Yarra. I am your host for this evening, Red Herring, but I will try to remain in the realm of the plausible.

Once upon a time there was a river that flowed unimpeded through this landscape. All along its course there were billabongs and wetlands, floodplains, grasslands and wildlife. The people that lived here managed the landscape with fire and a profound understanding of the land and the cycles of the seasons.

These seasons were defined by the activities undertaken at different times of the year according to what was flowering, fruiting, breeding and in abundance. This abundance made the area a meeting place for the many communities that lived in the river’s catchment and those that lived beyond it.

This river was called Birrarung, the river of mists and shadows. In Tim Flannery’s words, the Birrarung’s wetlands were once the Kakadu of the south.

The first name Birrarung was given by Europeans was the illuminating “Freshwater River”. It was then named after the Aboriginal word, Yarro, a verb meaning “flowing”. This word was misheard and misunderstood as the river’s Indigenous name, which we now know as the Yarra.

Misunderstanding was rife. John Batman believed he had purchased 500,000 acres of land along the Yarra in return for scissors, shirts, tomahawks, knives, blankets and handkerchiefs. However the locals he traded with understood these things to be gifts of friendship in exchange for passing through their land. As we know, this and so many other misunderstandings had tragic consequences for the entire Indigenous population. We pay respect to those that lived here and their descendants as the first peoples of this land.

So while we stand here and contemplate this relatively recent history we might also contemplate that up to 70% of Melbourne’s drinking water comes from this river. Two million of us drink, bathe and swim in its waters. And as around 60% of our bodies are made up of water, so are we one with this river.

We may understand this conceptually, but how do we respond beyond knowing such a supposed ‘fact’. As I am a red herring, I choose to sing. But what is a red herring you ask? And I wonder myself. Am I distracting you from your task, the main game, the goal or am I the task? What is important here? What is this island but a strange aberration.. an afterthought? An offcut? A red herring. So we are here to take this journey together

TEACH SONG 1 – The River is Flowing

LEADING – NARRATOR LEADS EACH BOAT FULL OF AUDIENCE UP TO THE HOLDING AREA ON THE ISLAND.. CONTINUES TO SING THE RIVER IS FLOWING

SPEAK 2 – FROM THE DIRT MOUND

The impact of colonisation has been described as a tsunami devastating this fertile food bowl. 300,000 sheep in 3 years compacted the once soft soils. Industry set itself up along the banks and sent effluent down its waters. The rich headed to the highlands, south of Birarrung, and the poor to the lowlands where the flooding occurred. In the middle of the 1800’s the first land was sold by Europeans. In Aboriginal culture it was impossible to sell land because you did not own the land, the land owned you. By the late 1800s the course of the Yarra began to be changed significantly in order to eliminate the uncontrollable, the inconvenient, the natural flooding, which fed Birrarung’s wetlands and billabongs and the people and animals that had lived here.

A series of channels, drains and harbours were engineered to harness the river and make way for development. Remnants of Birrarung’s former glory can be found in the curated lakes and ponds in the Royal Botanic Gardens.

All along the riverbank was polluting industry, including basalt quarries. In 1929 a channel was built along the Yarra through excavating and flooding of one of these quarries, in the hope of reducing the flooding. This wrenched the landmass that we stand on from its bank, creating Como Island, which was named after Como House up there on the hill, which was named after Lake Como in Italy. So it goes.

And yet the flooding continued.

But in 1957 the Upper Yarra Reservoir and the river’s fate was complete. Reduced to 50% of her flow she was finally tamed.

The Yarra is a tidal river and this is the place where the salt water meets the fresh water, the city meets the bush and slowly, slowly this island is dragging itself back to meet the Yarra’s banks, but this time it will meet the opposite side. The river’s original course is silting up and will one day reunite this afterthought of a landmass with its long lost lover, the riverbank.

So now, in a seamless segue, I will take you to the beating heart of the island…

The audience gathers briefly after seeing the heart .. Red Herring to lead off as soon once the bulk of people are there…

TEACH SONG 3 – I left my Wife in New Orleans

I left my wife in New Orleans with 43 kids and a can of beans
And I thought I was right, right, right for my country oop dee doo, left, left

Who here was a Scout? What is your most prominent memory?

This Island was leased by the Scouts in the 50’s and 60’s and the building on the island, what is now the gallery, was converted from the old Scout Hall. They renamed the island after the scout’s benefactor, Sir Edmund Herring. Seems an appropriate name for this little blip of land. Such a fish out of water. The Scouts are a fabulous organisation, determined to produce effective well-behaved people. When I think of the scouts I think of campfires and stories and songs with repetitive movements. I have no idea whether this impression is accurate but I am led to believe that the modern version of the scouts has moved in to the modern age.

Other keepers of the island are the Friends of Herring Island who were formed in the 70’s once the scouts had moved on and are still very active today. In fact you can join them. Their key aims are to:

The next island artwork you are going to see is Tanderrum. A Tanderrum is an Aboriginal welcoming ceremony.

For years this island was neglected and used as a dumping place for the silt dredged from the river to keep it flowing. From the 1970’s the Friends of Herring Island began to revegetate and in the mid 90’s Parks Victoria took over its management and with the help of the Friends, began its restoration and establishment as a wildlife reserve and recreational park.

In the late 90s the island was embraced by the vision of Maudie Palmer, who was the founding director of Heide Park and Art Gallery and the sculpture park was launched as part of the 1997 Melbourne International Festival. The permanent sculptures on this island are made from natural materials from across the region, like granite, red gum and bluestone, but like so many things on the island, are imported, and the artists come from across the Western globe. These sculptures draw on themes like the Aboriginal history of the land, the interdependence between nature and culture and the beauty of the environment.

Herring Island is a symbol of hope. Wrenched from the riverbank in the belief that what we must do is control the environment, rather than serve it, the island has survived repeated attempts to have her developed in to a department store, a block of flats, a casino. She has remained beyond the grasping fingers of developers of all kinds; those that wish to profit from this country’s seemingly boundless natural resources. Instead, the island hosts those committed to the restoration of its environment and the vision of artists responding to the landscape. The materials the artists have used in their work come predominantly from elsewhere. As do most of the artists. And so what the island represents is open to your interpretation. It welcomes all perspectives.

The Yarra looks muddy, but it is not unclean. In fact, it is probably one of the cleanest capital city rivers in the world. Since the major cleanup campaigns of the late 1970s and 1980s the river has again become home to platypus and a range of migratory native fish species. Platypus have been sighted in the Yarra River at Kew, less than 10 km from the city centre.

Five major cities in the world have closed catchments. Melbourne is one, providing the most pure and best drinking water possible. Our catchments are therefore precious beyond contemplation and something that should never be taken for granted. And our bodies are made up of 60% of the stuff.

I hope you have enjoyed this journey for now it is drawing to a close. Take a moment to feel your feet on the ground of Herring Island as you follow the path back to the jetty.